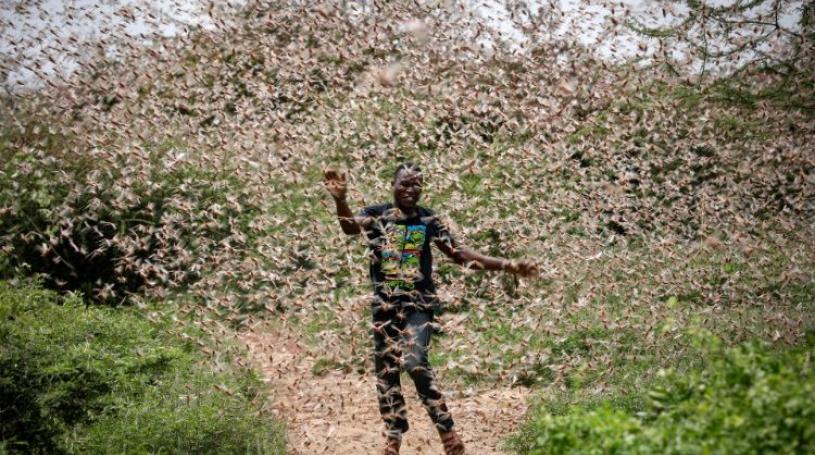 Massive swarms of locusts sweeping across much of east Africa have reached Uganda and Tanzania, the United Nations has said, threatening millions more people with hunger in an already fragile region.

Tanzania has detected swarms in its northern border areas close to Mount Kilimanjaro and hired three planes to spray pesticide, a tactic seen as the most effective means of countering the spread of the insects.

Ugandan authorities have rushed pesticides to affected areas and has mobilised thousands of troops.

“We are using motorised sprayers, a drone and manual sprayers,” Stephen Byantwale, the commissioner for crop protection at the ministry of agriculture, said. “They [locusts] are spreading like wildfire, so they are a real, major threat.”

The outbreak in East Africa is the most serious in decades and has already devastated crops across a swath of Kenya and Somalia.

Climate experts have pointed to unusually heavy rains, aided by a powerful cyclone off Somalia in December, as a major factor in the crisis. The locusts arrived from the Arabian peninsula after cyclones dumped vast amounts of rain in the deserts of Oman – creating perfect breeding conditions. 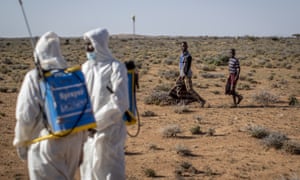 Pest-control sprayers in the desert near Garowe, in the semi-autonomous Puntland region of Somalia. Photograph: Ben Curtis/AP

One especially large swarm in north-eastern Kenya measured 60km long by 40km wide. Even a small swarm of the insects can consume enough food for 35,000 people in a day.

The infestation from the Arabian peninsula has also affected India and Pakistan.

With further rains expected in the region in the coming weeks, experts fear the number of locusts if unchecked could grow by up to 500 times by June, when drier weather is expected.

One challenge is that many locusts are breeding in the semi-autonomous Puntland region of Somalia. Much of the territory there is threatened or held by al-Shabaab, the Islamist extremist group. That makes it difficult or impossible to conduct aerial spraying to kill the insects. 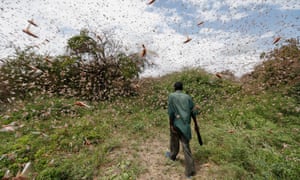 A man walks through a swarm of desert locusts near Kitui county, east of Nairobi, Kenya. Photograph: Dai Kurokawa/EPA

A single swarm can contain up to 150 million locusts per sq km of farmland, an area the size of almost 250 football fields, regional authorities said.

There are concerns for South Sudan, where almost half the country faces hunger as it emerges from years of civil war.

Even before this outbreak, nearly 20 million people faced high levels of food insecurity across the east African region long challenged by periodic droughts and floods. Some analysts have blamed the locust outbreak on climate change, though a direct link is difficult to establish.

“We know that cyclones are the originators of swarms – and in the past 10 years there’s been an increase in the frequency of cyclones in the Indian Ocean,” said Keith Cressman, senior locust forecasting officer at the UN Food and Agriculture Organisation (FAO), earlier this month. 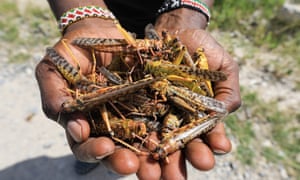 “Normally there’s none, or maybe one. So this is very unusual. It’s difficult to attribute to climate change directly, but if this trend of increased frequency of cyclones in the Indian Ocean continues, then certainly that’s going to translate to an increase in locust swarms in the Horn of Africa.”