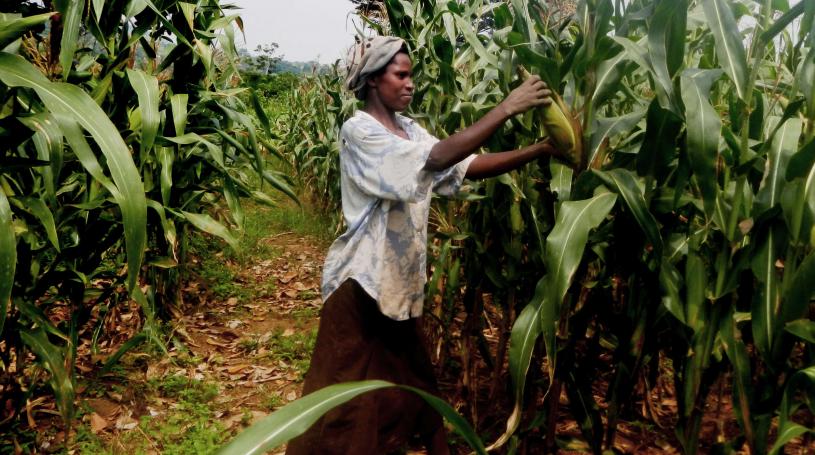 For the past 50 years, Daisy Namusoke has grown crops on her small plot of land in the Buikwe District of Central Uganda, mostly to feed her husband, five children, and two grandchildren. Like most smallholder farmers in Africa, she grows a mix of crops, relies on saved seeds and those purchased from local sources, and uses little by way of external inputs, such as synthetic fertilizers.

Her struggles are also typical. Pests perpetually threaten her family’s food security and the meager income she earns from selling bananas to local traders. She does her best to halt the infestations by spraying affected areas with a concoction of Tithonia leaves mixed with wood ash and water. But it’s a battle she rarely wins: infestations regularly raise the specter of total crop loss.

Daisy’s story, like that of millions of other small African farmers, is the reason why so many people have concluded that transforming African agriculture is an urgent priority, one that will shape the continent’s future — and perhaps humanity’s as well. 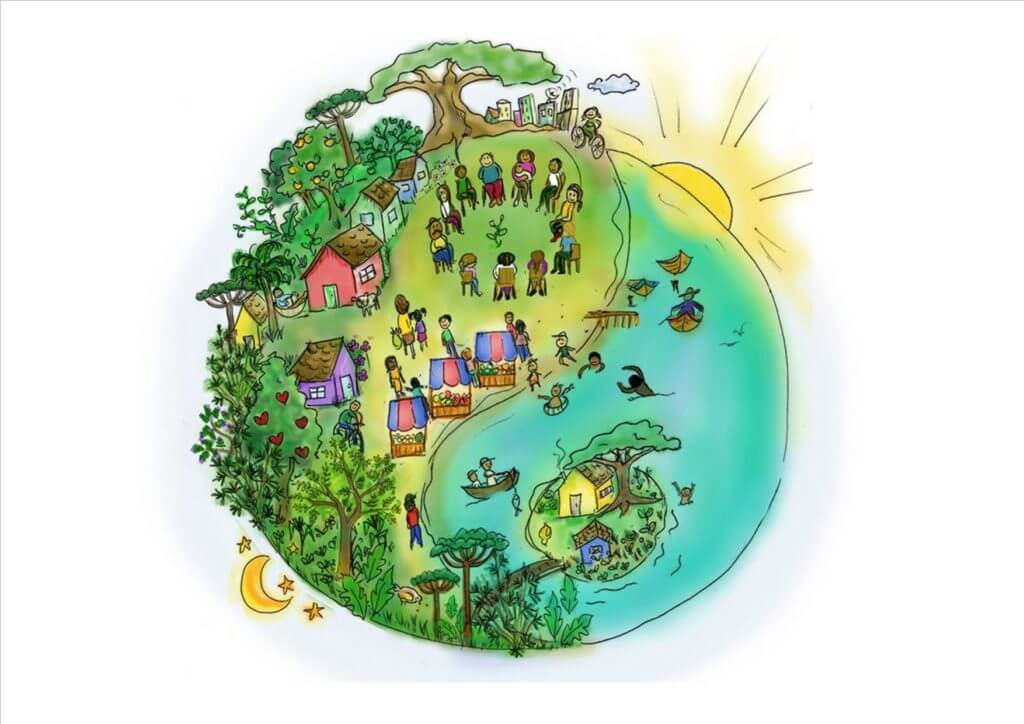 The solution, according to many of my professors and colleagues (first during my master’s studies, and then as an outreach officer at one of the largest public agricultural research stations in Uganda), is agroecology. Agroecology models itself explicitly on traditional farming methods and promises to shield farmers from disenfranchisement at the hands of large corporations, for fear that countries like Uganda will follow in the footsteps of the United States and other developed nations that are dominated by “Big Ag.” It offers a host of practices that target pests, soil fertility, and irrigation. Most modern inputs, including synthetic fertilizer, pesticides, machinery, and biotech crops are to be avoided.

Yet the more I have immersed myself in the lives and hardships of smallholder semi-subsistence farmers as an outreach officer, the more I have come to conclude that agroecology is a dead end for Africa, for the rather obvious reason that most African agriculture already follows its principles. Like Daisy, the farmers I work with don’t have access to synthetic fertilizer or pesticides, they don’t monocrop, and they can’t afford tractors or irrigation pumps. So the various refinements that proponents of agroecology suggest offer little to help them dramatically raise their yields or reduce crop losses, much less offer them a life beyond farming if they choose to pursue one.

Agroecology conforms to the “appropriate technology” school of environmental thought, favoring technologies that are small-scale, low energy, locally governed, and labor intensive. But agroecology is woefully out of step with the reality of African agriculture. Its anti-corporate, anti-industrial politics could not have less to do with the current economics of agriculture in sub-Saharan Africa, and the practices it promotes are at best a refinement of those that keep African farmers bound to the soil and confined to poverty. In these ways, proponents of agroecological farming in Africa effectively advocate for the status quo, not transformation. They are proscribing technology and agricultural modernization in the name of social justice and working within the limits of nature, rather than giving African farmers a plausible pathway out of hunger and poverty.

The term “agroecology” has no universal definition, and its meaning has evolved substantially since it was first used in the 1920s and ’30s by scientists attempting to integrate the new discipline of ecology with agronomy. They recognized that farms could be studied as ecosystems, albeit a distinctive “domesticated” kind. The term remained mostly confined to academia until the development of the modern environmental movement and its discontent with the Green Revolution, at which point agroecology shifted from a descriptive science to a prescriptive framework for farming. In this way, agroecology in its contemporary usage is fundamentally a reaction against agricultural modernization.

A healthy agroecosystem, advocates further argue, can generate yields that rival, or even surpass, those of conventional systems. Evidence for such sweeping claims, however, is limited to isolated proof-of-concept case studies that provide no direct comparison with conventional production. There is little indication of the conditions that are needed for agroecological farming to be highly productive, and whether these conditions are widely available. There is simply no plausible case to be made that, at a large scale, agroecology doesn’t involve substantial productivity trade-offswhen compared with the conventional alternative.

Agroecology, however, is far from simply a technical approach to food production. It is also a development model and social justice movement. Contemporary arguments for agroecology almost universally reference economic and social benefits, specifically for poor, smallholder, and subsistence farmers. The thinking is that agroecological practices require little capital to implement compared with the high cost of obtaining synthetic fertilizers, pesticides, and motorized equipment. But the claims of benefits to poor farmers go much further, even to the point that agroecological production is called by its very nature “socially just.”

The interests of farmers are set in opposition to those of rapacious colonialist agribusinesses, whose encroachment must be defended against. It is even said that what is needed is a “re-peasantization” of agriculture, a return of food production to the hands and backs of so-called peasants, the result of which is “food sovereignty.” The goal, in other words, is to allow struggling indigenous farmers to continue farming.

Since pre-colonial times, agriculture in Africa has remained overwhelmingly small-scale, with an average farm size below two hectares. The vast majority of smallholder farms employs traditional farming practices, with key enterprises focusing mostly on crops and animals that serve as both food and income sources. The practices that agroecology promotes are not qualitatively different from those currently in widespread use among smallholder farmers in Uganda and sub-Saharan Africa more broadly.

Take intercropping, for example: the simultaneous cultivation of more than one crop species on the same piece of land. Agroecology’s promotion of intercropping stems from the underlying ecological principles of agroecosystem diversity. However, smallholder farmers in sub-Saharan Africa have grown crops in combination throughout recorded history as a hedge against crop failures and as a means of diversifying food sources.

Agroecology also promotes mulching, the application of a layer of material to the surface of soil to conserve soil moisture, reduce weed growth, and improve soil fertility and health. In Uganda, banana-and-coffee farmers in southwestern parts of the country have been using mulching and cover crops for decades. The same is true of calls to raise livestock and crops together. In the northeastern and southwestern parts of Uganda, where livestock is a huge part of livelihoods, farmers have long used animal waste as a fertilizer amendment for poor soils. In fact, these methods have been utilized by African farmers for millennia.

It is no coincidence that African smallholder farmers widely employ practices promoted by agroecology. Indeed, the agroecological framework offers little more than a codification of traditional farming practices. Advocates proudly advertise this fact, presenting agroecology as precisely what traditional farmers do when left to their own devices. But it’s not as though most smallholder farmers have an alternative. Agroecological practices represent solutions that traditional farmers have devised to maximize their yields and food security, given limited resources.

In such arguments, I find nothing resembling the priorities and aspirations of subsistence farmers in Uganda with whom I have worked. They are looking to improve their situation, not merely continue it.

Smallholder African farmers like Daisy Namusoke need more options, not fewer. When I met Daisy at her farm in the summer of 2018, I asked her whether she preferred a traditional solution similar to her Tithonia–ash concoction or something more modern. She emphatically responded, “I do not mind whether it is a traditional or modern solution, provided it can make me have a big bunch of bananas.”

Improving the lot of smallholder farmers requires more than just seeds, though — Africa accounts for less than one percent of global synthetic fertilizer use. To combat food insecurity, several countries in sub-Saharan Africa have instituted government subsidies for fertilizer and other agricultural inputs that target poor farmers. Malawi is most notable among them, which has enacted multiple input subsidy programs since the 1970s, and the latest iteration — the Farm Inputs Subsidy Program (FISP) — remains in place today.

These programs have been shown to not only greatly increase agricultural yields but also to reduce deforestation pressure. Although questions remain about the economic sustainability of such programs and whether they are the best means of increasing fertilizer use, their successes serve to underline the human and environmental benefits of modern agricultural inputs, and their shortfalls highlight the inseparability of agricultural modernization from economic development.

Expanding irrigation is similarly vital. A mere 4 percent of arable land in sub-Saharan Africa is irrigated, compared to 14 percent in Latin America and 37 percent in Asia. Sub-Saharan Africa’s rainfed agriculture is inherently susceptible to rainfall variability, vulnerable to climate change, and often limited to a single growing season. And the irrigation schemes that do exist overwhelmingly rely on surface water. Tapping into sub-Saharan Africa’s rich ground water resources could increase irrigated land by well over 100 percent in 13 countries, including Uganda, according to recent estimates. Governments should make expanding irrigation a policy priority, funding the identification of shallow ground water resources and increasing access to irrigation pumps, as Ethiopia has done with notable success.   ­­

Basic infrastructure is also an important part of the story but is not even considered by agroecologists. Research indicates, for instance, that high transportation costs in Uganda, as a result of poor road and transportation infrastructure, make it difficult for farmers to get their goods to urban markets, resulting in high urban food prices. High urban food prices in turn incentivize urban residents to relocate to rural areas, preventing urbanization and perpetuating Ugandans’ reliance on semi-subsistence agriculture.

The ongoing advocacy for an agroecological revolution in Africa is quite vocal on how the model puts farmers at the center of the food system but oddly silent on how it can practically get them out of poverty. It loudly proclaims that agroecology democratizes decision-making but explicitly advocates limiting choices and practices that small farmers might avail themselves of, discouraging synthetic fertilizers and pesticides, mechanization, and biotechnology. It wraps itself in the cloak of anti-colonialism even as the NGOs promoting agroecology are funded primarily by western, developed-world donors.

Agroecological practices can, of course, be useful in some contexts. That’s why African farmers still use them. And if farmers can make low-cost changes to improve their yields that are feasible given available labor, I enthusiastically support them. But they should be thought of as a set of tools, not a pair of handcuffs.

Whatever the problems and limitations of modern agriculture may be, dogmatic adherence to a model based fundamentally on traditional farming is not the answer. African agriculture needs transformation. Like the farmers themselves, we should stop fixating on practices and technologies and instead focus on goals and outcomes, both human and environmental. We should jettison the arbitrary distinction between traditional and modern — the only criterion that gives coherence to the practices that agroecology promotes and eschews — as one that carries little meaning or import for poor farmers themselves.

Most of all, we should set a goal far higher than maintaining the status quo. To chart the right course, we must have an honest conversation in which we hold each other accountable in advocating for solutions that can address the fundamental condition of agriculture in sub-Saharan Africa: poverty.