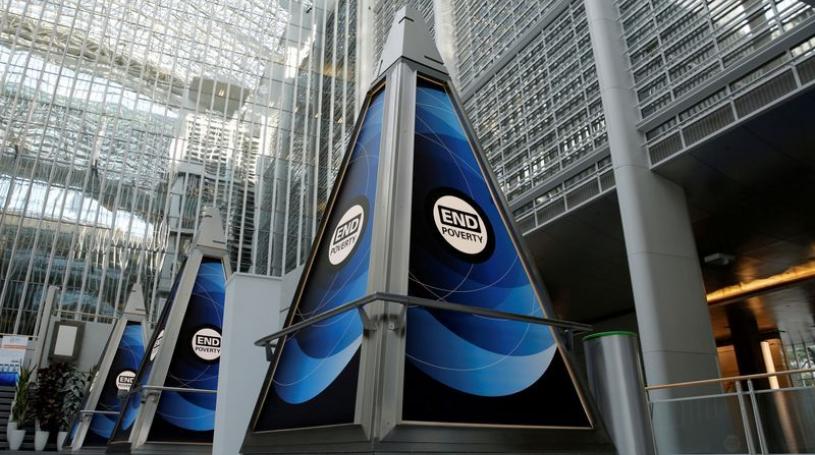 WASHINGTON (Reuters) - The poorest countries in the world face food insecurity and malnutrition due to the coronavirus pandemic, a drop in foreign exchange earnings, export restrictions and the breakdown of supply chains, a senior World Bank official said on Tuesday.

Mari Pangestu, the World Bank's managing director for development policy, underscored the need for global cooperation to avert food crises in the most vulnerable countries in remarks to an online meeting of agriculture ministers from the Group of 20 major economies.

"Refrain from imposing export restrictions and avoid unnecessary import barriers and build up of stocks," she said, adding that global grain production and stocks were at near all-time highs, making restrictions unnecessary.

Pangestu told the ministers that concerted national actions, international cooperation and additional funding to shore up agricultural production could limit the risks of food insecurity and malnutrition.

"The G20 accounts for a large share of food trade and hence its actions will have significant global impact," she said, urging G20 countries to ensure that supply chains for food continue to flow and to prioritize food and food-supply logistics as essential.

Food security emerged as a growing concern during last week's virtual meetings of the World Bank and the International Monetary Fund with finance ministers from around the world.

In addition to the pandemic, which has triggered the deepest recession since the 1930s, the worst locust plague in decades is decimating millions of hectares of crops as it spreads across Africa, the Middle East, North Africa and South Asia.

Locust swarms have infested 23 countries, according to World Bank data. They have torn through large swathes of food crops in the Horn of Africa, where more than 24 million people are already "food insecure" and 12 million people are internally displaced, the Bank said in a recent blog posting.

The Food and Agriculture Organization of the United Nations estimates that 821 million people, or nearly 11% of the world population, are undernourished, the highest rate since 2011.

Pangestu said the Bank, which is making $160 billion available to respond to the pandemic over the next 15 months, is working closely with countries and international partners to monitor food supplies, and how the loss of income is impacting people's ability to buy food.

She said it was critical to leverage community-based groups to distribute food, and implement social protection programs for the world's poorest. Digital technologies could also help monitor harvest conditions and link producers with consumers.

Up to 80% of the workforce in some of the poorest countries are both producers and net consumers in the agricultural and food sectors, she said, underscoring the need to make food supply a priority.

"Let's not repeat what happened in 2008 when trade restrictions amplified world food price spikes and caused 130-155 million more people to fall below the poverty line, especially in the most vulnerable countries," Pangestu said.

G20 agriculture and food ministers agreed at a virtual meeting on Tuesday that emergency measures to contain the spread of the pandemic must not create "unnecessary barriers to trade or disruption to global food supply chains."